Posted on December 14, 2022 by toomuchexperience

Way back in 1995, when I lived in Colorado and was just getting into watching national observed trials I bought a pair of expensive motorcycling touring boots from Ryan Young’s booth at a US National event near Colorado Springs. I’ve written about these boots before; Gaerne Goretex Boots. I’m not going to rehash the fantastic quality of Gaerne footwear. I’ve done that before. Nothing the company makes today is anything like my boots. When I finally got around to reviewing these boots in 2017, they were already long out of production.

Not long before we moved to Red Wing, I bought a pair of Merrill winter boots. Warm, insulated, waterproof with a rubber outer shell, and sort of fragile. They lasted a half-dozen winters, with occasional use mostly when I was shoveling the driveway. But they pretty much self-destructed in the closet and came to pieces when they finally died. 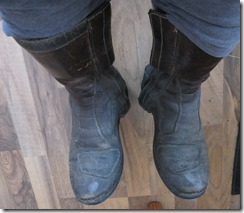 I’d forgotten that I was winter-bootless until the first snow storm of the season. We got about 6” of heavy wet snow in early December and I needed to clear the driveway that evening so I could get my wife to a doctor’s appointment early the next morning. It was about 10oF outside and still blowing snow. Everything in my closet is moderate-to-warm weather footwear, except my old Gaerne boots. They still fit, they’re still waterproof and relatively warm, and the Vibram soles grip the frozen ground just fine.

These boots are almost 30-years-old and in many ways as good as new. They fit me like an old, well-broken-in glove. I suspect they will be in my closet until my kids clear out our estate.

2 Responses to My Favorite Boots