Posted on July 22, 2022 by toomuchexperience

One of the downsides of being a motorcyclist is that when people find out that I ride a motorcycle they immediately start stereotyping me. My 12 year relationship with Minnesota Motorcycle Monthly started out when I met a young couple at a music magazine party, who my daughter had introduced to me as “people who ride motorcycles.” They were youngish, relative to me, dressed in black with a fair amount of leather in their ensembles, and pretty much fit in with the hipsters who were attending the party; although they had taken over a couch a corner of the house out of the line of party traffic. I have no clue how I was dressed. I’d driven my daughter, her year-old son, and my wife to the party, so I could have been wearing the “business attire” crap required for my corporate job or I could have been outfitted in my usual away-from-work worn jeans, long sleeve tee-shirt, and high-tops “fashion statement.”

I don’t like parties much, so I was mostly looking for a conversation near the door so I could pretend to be polite, say “hi” and “nice to meet you” and slip out the exit and take a long walk around the neighborhood until my family was ready or willing to let me get the hell out of there. Crowds of more than three people make me nervous and there must have been fifty people crammed into that house. I was not looking to strike up a friendship or even a long conversation. I got the feeling they were hoping our introduction wouldn’t waste a lot of time, either. Troy Johnson and Erin Hartman were making similar assumptions about me that I made about them. When they politely asked, “What do you ride” in response to my daughter’s introduction of me as a “biker, too” they were clearly surprised when I replied “an 850 Yamaha TDM.” To them, I was an old guy and they had made the logical assumption that I would be pirating along on some sort of Hardly or a Hardly look-alike. Likewise, I had made similar assumptions about them.

After we reassembled our interior stereotypes, we actually had a conversation that resulted in Troy’s complaining that nobody who read the magazine ever bothered to write in with either agreement or complete disgust about anything published in the magazine. I offered to write an article that I guaranteed would create response. They offered to publish it for a nominal fee if it was any good. That article ended with “We’re, on average, a freakin’ nation of posers and squids and we aren’t worth the effort it takes to run an EPA test.” The next few weeks, Troy and Erin fielded more letters to the editor than they had received “in the history of the magazine.” I’ve been a columnist for MMM since that first brief October 1999 shot across the bow of what passes for motorcycle journalism and community. 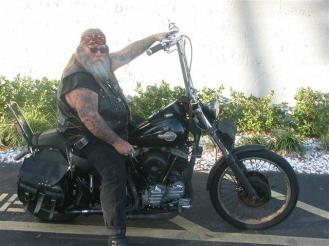 The point, of course, is that even motorcyclists assume the worst about people who ride motorcycles. And, usually, they are right. Be honest. You are hanging out at a restaurant and this guy rides up with similar looking buddies, puts a kickstand down, and waddles into the building. What are you thinking? I know I’m going to wrap up my meal and get the hell out before one of those characters sights in on my helmet and Aerostich gear and decides to have a conversation with me. If I’m lucky, they haven’t kicked over my WR or V-Strom in a little-boy “rice burner” exhibition of stupidity and bullshit fake patriotism and I can get the hell out of there without any sort of incident. For all I know these guys are all lawyers and doctors dressing up as bad boys, but I’m not looking for poser friends, ever, and there is nothing about any of the possibilities that is worth testing the waters.

When I showed this guy’s picture to my wife, she said the guy who did the welding for a theme park project she designed 20-some years ago looked just like him. I looked at the early assembly of that stuff and mentioned to the project manager that they might want to hire an independent welding inspector before the frames were covered up with fiberglass artwork. I wouldn’t trust my kids to something that guy had welded. I’ve known a few great welders and they were all as personally meticulous as they were professionally picky. If it looks like a slob, acts like a slob, and sounds like a slob, I’d assume it is a slob in all areas of life. Her “welder” was just another shop guy who’d fooled some ignorant management moron into believing he could weld “good enough.”

On the other hand, I know several brilliant musicians, a few genius college professors (physics, sociology, electrical and mechanical engineering, philosophy, music, and neurology PhD’s and MS’s), more than a few technicians and engineers (mechanical, alternative energy, and electrical engineering), and a couple lawyers who have all of the above biker’s physical and sartorial attributes except for the excess lard (although I know a brilliant Colorado lawyer who could wrap himself in that biker’s “gear” without much discomfort). The problem with stereotypes is that they don’t allow you to pick out the one-in-some-large-number exceptions. The reason we naturally create stereotypes (“profiles”) is because they are more often than not accurate. They save us time, energy, and create some safe margin of distance from people who are often dangerous or useless.

One of my favorite recreation-reading authors, Minnesota-ex-patriot John (Camp) Sandford, is pretty typical in his “civilian” outlook on motorcyclists. In his newest book, Mad River, Sandford has one of his state cop main characters’, Lucas Davenport, thinking about where you look to find criminals: “Davenport had spent the best part of two years building a database of people in Minnesota who . . . knew a lot of bad people. He had a theory that every town of any size would have bars, restaurants, biker shops, what he called ‘nodes’ that would attract the local assholes.”In a list of three places in all of society where you might find the worst criminals “biker shops” makes the grade. Something for all of us to be proud of? Pound your chest and whine “that’s not fair, we’re not all assholes” as much as you like, but you know Sandford is just writing what everyone is thinking. By “everyone,” I’m including us, even we think most bikers are assholes.