Posted on February 21, 2020 by toomuchexperience 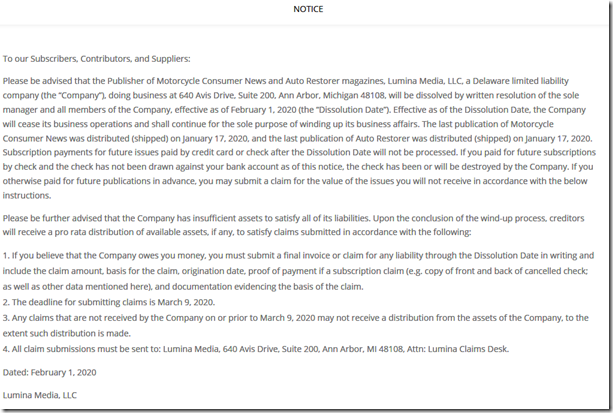 With this sudden and unexpected (by the subscribers I know) announcement, Motorcycle Consumer News produced it’s last issue in January of 2020. MCN has been around in its reader-sponsored format since 1982, So, 38 years of hard-hitting, unbiased reporting on an industry that has done pretty much everything possible to create a simpering, press-release duplicating news media; from print to YouTube drivel.

I have to believe the industry and rider participation is shriveling toward becoming ancient history. In the US, we’re down to two actual motorcycling magazines, Cycle World and Motorcyclist, and one those two has made a hard bet on eBikes over motorcycles with Cycle Volta. The residue of motorcycle “journalism” is a bunch of biker rags that are more about biker broad pictures and chrome crap than motorcycles and motorcycling.

MCN’s Facebook page simply says “MCN is no more. Thanks for riding with us for the last 50 years! Visit MCNews.com for more info. Keep the shiny side up.“ All you will find at MCNews.com is the statement at the top of this blog entry. Not only is the magazine dead, but the MCN’s  publication history is gone. That’s pretty brutal.