VBR 4 and Beyond: Reflections on Now, Then, and the Future

Posted on August 22, 2018 by toomuchexperience

What makes a guy who started the whole textile riding suit business tick? As you’d expect, it’s complicated. Andy Goldfine really only wanted to make Aerostich Roadcrafters; the company’s posterchild product intended to make daily commuting on a motorcycle practical, fun, comfortable, and safe. As he said during a talk at the Very Boring Rally (VBR4), he started the Riderwearhouse retail and mailorder business to be able to support the 3-4 Roadcrafters the company would make each month. Being a retail store businessman was a long ways from a dream Andy had for himself. 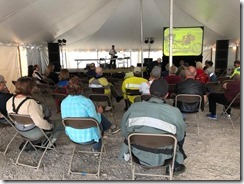 35 years later, Andy and his company are throwing a party for the people who kept the company alive after every other motorcycle clothing company in the world copied their designs, moved production to the 3rd world, undercut Aerostich’s prices and quality in equal percentages, and out-marketed Aerostich’s Whole Earth Catalog style to a couple of generations of riders who get most of their information from Google searches and make most of their major purchases from Amazon.com. “Word of mouth” has devolved into Yelp and Google reviews by strangers with undeclared motivations and relationships and minimal information of value. If you look closely at the audience for this VBR seminar, you’ll see a lot of bald and/or grey heads, which is pretty much what motorcycling in 2018 resembles: lots of geezers with grudges.

It’s easy to imagine the end of motorcycling. I do it all the time. However, when I was talking to another rider about my first Aerostich I was reminded of the fact that motorcycling looked pretty doomed in 1983 or 84 when I  bought that first Roadcrafter. The California dealers were vanishing. In 1984, there were loads of brand new 1980-1983 motorcycles still on showroom floors. In fact, in late 1983 I talked the owner of a 1982 Yamaha Vision 550 down from his once-reasonable $2200 asking price to $1,000 because the local Yamaha dealer was dumping 1982’s for $1400 and new 1983’s for $1800. Two years later, I bought a like-new 1983 Vision for $1,000 with the same argument. I sold that 2nd Vision in late 1991 in Colorado for $2200 to a guy who drove all the way from California to buy it.  By then, the industry was in yet another motorcycle recession and new Japanese bikes were stagnating on showrooms once again.

It’s easy to imagine the sad current state-of-affairs is a predictor of the future, just like when people imagine current inflated house prices are going to last forever. The only thing experience with the past has taught me is that I am pretty good at guessing when crashes will occur and I suck at predicting bull markets for anything.

People in the industry want to blame Millenials for the current crisis. In Eric Brandt’s article, “Analysts are Wrong about Why Millennials Aren’t Buying Harleys,” he wrote, “This all reminds me of a fascinating story Bob Lutz told about the Chrysler Imperial in an interview with Popular Mechanics. ‘That was the source of one of the major arguments Lee Iacocca and I had,’ Lutz said of the Imperial. He said Iacocca showed him the car and asked what he thought. Lutz responded saying it looked ‘aesthetically, 10 years old the day it comes out’ and went on to criticize the vinyl roof, the fake wire wheels, and the opera windows. Shocked, Iacocca responded saying ‘you might not like it because you’re too young, but by the time you’re 65, you’ll like a car like that.’ What Lutz says next applied to the Imperial then and it applies to Harley-Davidson now. ‘I won’t because my generation admires high-end European cars. You like [the Imperial] because when you were 40-years-old, that’s what American luxury cars looked like.’” Harley isn’t the only company to cling to what worked 30 years ago, but there is going to be a hole in one or two generations’ knowledge of what motorcycles “looked like” and someone is going to fill it.

Aerostich’s riding products have changed substantially, while hanging on to the functional concepts that attracted me and thousands of riders to their gear. Their quality standards have only become more refined and stronger over their 35 years of production and invention. There is only one model of what motorcyclists look like and it is the variations on Aerostich’s Roadcrafter and Darien riding suits. In 30 years, if today’s younger riders are wanting to look like motorcyclists from their 20’s and 30’s, they are going to have to be wearing Aerostich gear. Every other brand is a cheap imitation, even if they aren’t cheap.

Here’s hoping Andy and Aerostich will keep doing what they do best as long as they want to be doing it.