Posted on September 26, 2016 by toomuchexperience

Some friends were showing or selling stuff at the Viking Chapter AMCA National Vintage Bike Show and I had a few hours to kill before my kids stuffed me for Fathers Day, so I blew $5 and hung out with old timers looking at old bikes in better shape than when they (either the guys or the bikes) were new. There was a lot of stuff to see. The state fairground’s Progress Center building was stuffed with motorcycles from my youth and beyond (Yes, Virginia. There were motorcycles before I was born.) and the campground to the north was manned by swap meet’ers plying their wares. 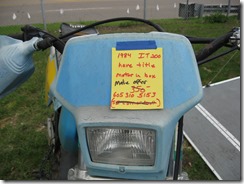 I’ve said this before, but there is still not a lot about owning and restoring old bikes that I get. I took a lot of pictures, talked to a bunch of people, and got asked “Do you know Victor?” in response to my MMM riding jacket. In all, I had fun, but wasn’t much tempted . . . until I spotted a cheap, fairly sun-thrashed, 1984 Yamaha IT200 for “make offer.”

I mostly know the 1984 IT 200 through it’s older, smaller brother; the late 70’s IT175D. Yamaha’s 175 provided a permanent motorcycle memory. Through a Nebraska dealership where I’d spent some money over the years, I got a weekend test drive on the mid-sized IT and, pretty much by accident, I discovered I could wheelie the little blue bike at will. That may not sound like a deal to you, but I have never been a wheelie guy. I can a dirtbike’s front wheel over a variety of obstacles, but just lofting it for fun had mostly escaped me. In fact, I’ve only been able to play Wheelie Guy on two bikes in 50 years, both were 175s. The other was a mid-70’s Husky. I have never had a bank account that could foot a Husqvarna, so the Yamaha has always been in my sights. A few years back, I met a North Dakota Vincent collector who also had a weakness for the IT175s. While I barely comprehended his fascination for the Black Shadow of British motorcycling, I totally got the 175 thing. In fact, he insisted I take one of his Vincents for a test ride, but was totally unwilling to hand over the 175. I got that, too. 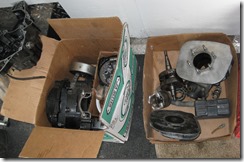 So, here was one I could afford. Not the bike I rode and loved, but pretty damn close and very accessible. The bits were mostly all there (the motor was busted, but fixable). The rod had snapped and punched a hole in one case. I could see from the parts box that most of the motor bits were reusable. The old bike had probably last been ridden in 2002 and had spent a good bit of the next 11 years leaning against the side of a Texas garage. The plastic was oxidized nearly gray, from the original Yamaha competition blue. The price was ridiculously right. It estimated at least $500 to get it running about another $1,000 to make it primo. A few hundred loving hours and I’d have a motorcycle that I lusted over when I was still mobile and reasonable athletic. I was tempted, but the temptation didn’t last.

Mostly, it was all of the work putting the old bike together would require. I’m in the midst of about two dozen projects, several of which could dominate the rest of my summer. I don’t need another project and that played pretty strongly in the decision.

Something else stuck in my craw, too. I have to wonder if this idea is what spawns those multi-garage motorcycle owning binges? What if I put all of those hours and all that labor into restoring this motorcycle that I remember so fondly and . . . it sucks? I realize that could be a double-edged sword. It might be that I suck on that great old motorcycle. Regardless, it’s not only possible but it’s pretty damn likely. Back when I discovered the joy of one-wheel-travel, I was also in my late twenties. The man I was then and the old man I am now bear damn little resemblance. That dumbass kid would kick my ass all over any competitive field I picked to die on. He was faster, stronger, braver, and had far less awareness of the consequences of falling on his butt. Hell, half of my butt isn’t even real, but I know for a fact how much pain getting it fixed again will involve. 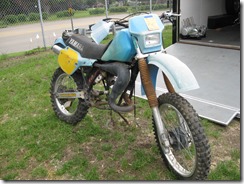 My daughter used to wear a t-shirt decorated with the words, “I only wish I could ride as fast as my dad remembers he did.” I was in my 40’s then. I have no doubt that another twenty years has made my younger self even faster. Hey! There is hardly anyone left alive to provide evidence to the contrary. I can say what I want and you’re not going to find a counter-argument from a live person or YouTube, unless you can find some old silent movies that have been transferred to digital video. I was never good enough to warrant more being part of the background for someone who was doing something terrific.

In the end, I just mounted up on my WR250 and went on with my day, leaving the IT175/200 memories untarnished. I hope someone bought it. I hope they restore it to brand new perfection. I’m not sure I want to ride it when they are done, but I probably would if I got the chance. If it–or I–was disappointing, at least I wouldn’t have money riding on the outcome.