Posted on October 5, 2015 by toomuchexperience 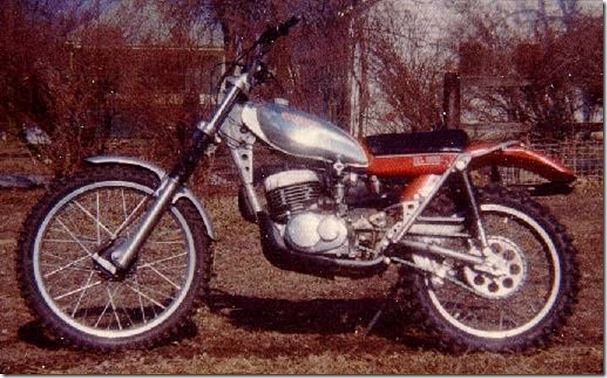 The Suzuki RL250 was one of the few bikes I’ve owned that was a constant disappointment and a complete competitive disaster. The RL was an awful trialer, with little torque, a poor suspension, too much height, and poor reliability. It was my first trials bike and my first Suzuki. After the Rickman 125 ISDT, the RL250 was the second new bike I ever owned, and the last.

Since the bike sold so poorly, Suzuki dumped their inventory, in late 1974 for almost 1/3 what I paid for the bike. That left a taste in my mouth that has only recently mellowed, allowing me to buy my 1999 Suzuki SV650. My $1,100 investment was instantly devalued to something less than $400, the revised, devalued price of a new RL in 1975 & 1976 (it was still the 1974 model, but they dumped their mistake in Suzuki dealers for another two years).

The only reason I can think of for owning one of these things, today, would be as an example of 1970’s crappy Japanese workmanship. The welds were embarrassing, a few weeks after buying the bike I re-welded a significant portion of the bike frame. There were spots where the welds actually missed the seam. It was probably one of the first Japanese production bikes with a chrome-moly frame and it showed their inexperience with their new welding equipment. Their faith in chrome-moly was dramatized by the spindly character of the RL250’s frame. Several other RL250 sufferers discovered that hard riding of this bike would result in busted frame members and one co-Suzuki trialer managed to snap off the swingarm at its frame attachment point in a Nebraska event.

Since the bike was worthless as a trialer, I added a little padding to the seat and used it as a weird trail bike. It was more fun, with that intent, but still unreliable. If you dropped the bike on its left side, and the motor kept running, the main seal on the opposite side self-destructed. I’ve witnessed this a couple of times at recent “vintage” events and, apparently, there is still no fix for this sad design. The forks leaked constantly. The air box was far from water-tight. The suspension was awful, at best, for any purpose. The engine lacked torque and blew up if you tried to overcompensate with revs.

The only claim to fame Suzuki made for this bike was its inventory-dumping price. In mid-1975, I saw them, new, on showroom floors for $400. I believe it was only imported into the US in 1974, although it took dealers at least three years to unload the inventory.

I am amazed to see these things at vintage events, usually grossly overpriced and often in like-new condition. In competition, the rider will be an old geezer who decided to pretend a 1974 bike is a time machine he can use to recover some missing piece of his youth. Typically, the rider is stumbling through the course, missing corners, rolling over tape, hanging up on 6″ logs, and sliding down hills heading for a painful high-side at the bottom. Anyone who can win a real trials event on the RL is, either, cherry-picking or an amazing rider. I’ve never seen anyone win on an RL, but some of the “vintage trials” events are so undemanding that I’m sure it’s happened in the last few decades.

The happy side of all this is that most of the current RL owners are retired executives or other idle rich characters. I couldn’t wish a better bike on that class of scumbag.

This entry was posted in my motorcycles, observed trials, suzuki. Bookmark the permalink.