When Do You Fold?

Posted on January 21, 2014 by toomuchexperience

As much to tweak the VW assholes in Albuquerque as anything, I’ve been running an ad to sell the damn RV for the last four weeks. I’ve had a couple of calls, but nobody serious. More than one Craig’s Lister took it on himself to berate me for calling my pile-of-crap Winnebago a “good deal” as a “handyman’s special” at $20,000. I understand the sentiment, but it’s worth what someone will pay for it and, somehow, Winnebago Rialta prices are pretty outrageous. There is a company cynically named “Rialta Heaven” that regularly asks insane prices, $30,00-40,000, for exactly our RV model. According to their website, they get it.

Sunday night, someone called my bluff. A guy from Phoenix called and offered me $17,000 cash for the RV and said he’d be in New Mexico tomorrow if I was ready to sell. Unfortunately, I’m not. First, we’re living in the damn thing and I have to find alternative housing if we’re going to give this pile of crap away. Second, it’s our primary transportation and the one thing I have not seen in New Mexico is a half-decent vehicle for a reasonable price. Reasonable prices are pretty common, but New Mexico drivers are astoundingly bad and pretty much everything older than an edible sandwich has been dinged up pretty good. Third, the title is still in Minnesota.

If you followed this idiot’s retirement journey since spring, you know I wasted a whole summer working on this vehicle. We’re into it for about $25,000 in actual investment, but dozens, maybe hundreds, of hours in sweat equity. I know, I know, all of that was about as brainless as buying ENRON stock on the penny market, but it happened. I did it because I fell for the bullshit I was getting about folks claiming to have enjoyed 100,000-150,000 miles of trouble-free travel in these damn things. I did it because I really liked the concept and wanted to believe VW was an actual car manufacturer. Pretty early in the refurb process, it became obvious that Winnebago was not a real anything. Their welds suck. Their choice of steel is pretty much the formula for “instant rust.” Their assembly process is based on the belief that hot glue is the ultimate fastener. Winnebago’s engineering is laughable. The company’s “customer service” is a nasty joke. Everything you would think a company based in Iowa would be, Winnebago is. Once I get going, though, I don’t stop to think about anything. I ride that way, too.

I’m not going any longer. While we have come to a stasis point in the repair process, the only “go” I would consider doing in this RV would be the shortest line back to Minnesota where I would park the damn thing, clean it up, and sell it to the first person with cash. It’s my wife’s money, but if it were up to me I’d take any amount of cash to remove this thing from my property. It is simply painful to look at. It reminds me of too many stupid decisions, too many stressful nights, too many hours on the cell phone trying to find a competent mechanic or an unobtainable part, and pretty much no good moments remain. So, it’s up for sale and I’m taking all bidders. I got one last night and two today. I suspect we’re going to be free of all things VW before the end of January. 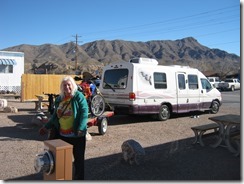 Officially, the Rialta belongs to Robbye. The majority of the purchase was something she wanted to do with money she inherited. Since she’s not involved in repairing the thing, she doesn’t have all of those negative moments to dwell on. She rarely drives it, so the hours I’ve spent behind the wheel wondering what will fall off of the damn thing next are mine only. She’s pretty much an uninvolved passenger on this trip, so she gets up every morning expecting to be able to do something fun; regardless of what I’m going to be doing to make that happen. We are clearly on two completely different trips here. I’d trade in a heartbeat, but that’s not an option.

Whatever we buy next will be a different kind of decision.