One Man (Cat) Down

Posted on November 21, 2013 by toomuchexperience 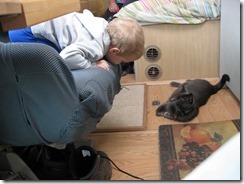 We’re about to leave Lake Texoma and one of us is not going to be on the rest of the trip. Our seven year-old cat, Spike, decided he’d had enough of travel and ran off this morning (Tuesday). He’d slipped out yesterday, but came back, after a couple of hours, when I called him. Today, he must have kept moving until he was out of ear-shot. One of our objectives for this trip was that we all survive it. We’ll be taking that item off of the check list.

I’m not a believer in karma, except with my usual depressives’ “faith in bad things.” Yesterday was an exceptionally good day. We spent about 12 hours with our daughter’s family and it was all good. I can not help but worry about the repercussions of an exceptionally good day. There is always payback for having too much good luck, too much fun, too much good health, or even a decent year in the stock market. Life can always get harder without a break, but there are always interruptions when you’re enjoying yourself. Supposedly, according to Kurt Vonnegut, Fats Waller would shout, “Somebody shoot me while I’m feelin’ good,” when he was playing particularly well. I think that is a great life motto. Somebody shoulda shot me yesterday.

I want to go on record here as being someone who is totally cat-neutral. I don’t, normally, dislike cats, but I wouldn’t cross the road to mess with one and I have been known to eat them in SoCal Vietnamese restaurants. (Another story.) In my 46 years of marriage, we’ve probably had two dozen cats and I’ve liked exactly two of them.  Spike was one of those two. This is exactly why I would rather be a hermit. Losing pets is far harder than just not having them. From here out, no more cats in my homes. If Robbye desperately needs a cat, I’m living somewhere else.

He and I had a bond, unlike any other animal I’ve ever known. Ever since he was a kitten, when I’d pick him up he’d give me a head bump. Almost a kiss. Every time, no matter what the situation. I called him my “puppy cat,” because he came when he was called, sometimes running long distances to get back when I called him. I’d see him bounding across our neighbor’s yards and he’d run right up to my feet. When I picked him up, there would be that Spike head bump and I’d carry him inside. When he was a kitten, he’d play fetch. Like a really good dog, he’d do it for the fun of it and never get tired of dashing across the living room to snag a toy and bring it back. The game was the reward. He wasn’t doing it for payment. No treats involved. My wife had confused him with her damn birds, so he wasn’t much of a mouser. He’d often play with them until they died of fright, but he didn’t eat them. He would catch baby rabbits and drop them at our dog’s feet so he could watch her tear them to shreds.

Like I said, Monday we spent most of the day with my daughter’s family. End of the day, we all piled into the RV for conversation and popcorn. You can see Spike right over Robbye’s head on the shelf; two glowing eyes and an near-invisible grey body. Robbye always claimed he was a “Russian Blue,” whatever that is. He was Spike, my cat. There never was a cat like him and there never will be again. I hope he’s safe, but I suspect he discovered coyotes are less than friendly. He was always dog-wary but he and our dog, Gypsy, played with each other like siblings.

In fact, without Spike there would have been no Gypsy in our household. Spike was there first and Gypsy was a totally whipped, neurotic dog when she arrived at our home. If Spike had been slightly aggressive, the dog would have been cowed and we’d have given her back to the shelter. She was close to that, anyway. They didn’t sleep together, but they were amazing friends, roughhousing through the winter days and thundering through the house sometimes till late at night.

The mood in the RV is pretty subdued tonight. He’s been gone for 15 hours and we’re leaving in the morning. Gypsy has been dead quiet all day. None of her usual awful whining, yipping, or even a bark. We’re back on the road tomorrow and, right now, it’s hard to imagine Spike will be with us. Spike’s timing couldn’t have been worse, but I suspect it doesn’t matter. With all of his great qualities, Spike could never figure out doors. Meaning he was convinced if the weather was bad at the back door, he wanted out the front because it had to be better somewhere. I do not see him finding his way back to the RV or home. He’s either going to get lucky and be adopted again or he’s dead. We’d really hoped he’d be a camp cat, but he hated the moving part of travelling and resented being stuck inside the RV. We should have given him to a neighbor who liked Spike as much as we did. Too late now.

Payback is a bitch.