Posted on October 4, 2013 by toomuchexperience 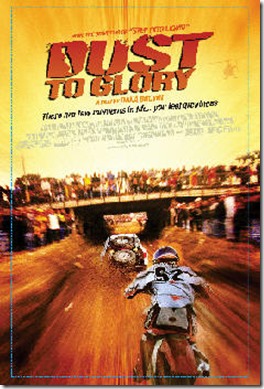 I am not a film festival guy, but last April I stood in line at the Riverview Theater to buy a ticket to Dana Brown’s Dust to Glory.  It was worth it.  It was worth it, twice. This year, I’ve written a few movie reviews for this magazine, but I rarely think twice about most of the movies I’ve seen.  I think about Dust to Glory often.  I own about a dozen movies, only three of which I’ve watched more than twice.  The rest were gifts that have sat ignored on a basement book shelf. As of this writing, I’ve seen Dust to Glory five times [That was true in 2006. By now, I’ve probably watched DtG at least 20 times. I fuckin’ love this movie.].  I’m not even close to tired of this movie [Still true.].

I don’t know who are the most incredible characters in this documentary, the riders and drivers who competed in the World’s Toughest Race, the Baja 1,000, or the people who filmed it. Brown had a huge cast of folks involved in this film, over fifty cameras and a ninety person crew.  The race was filmed from cab-cams, helmet-cams, helicopters, hand-held high-def gear, and tripod-mounted traditional cameras.  Most of the unbelievable bike-cam footage was filmed by bike-riding cameramen and their riding skill is so close to that of the competitors that you can’t tell one from the other. One cameraman, Lou Franco, strapped on a video camera and hung with Mouse McCoy for an incredible distance.  Later, Franco rode 12 hours after he breaks his hand slamming it into a road overhang.  Franco doesn’t slow down, but he holds the hand in front of the camera a few times and curses his luck.

Mario Andretti, the honorary race marshal, took a turn in a pickup and tore up the road fiercely enough that he killed the vehicle.  Another of racing’s monsters, Parnelli Jones, is in the film long enough to introduce Robbie Gordon.  Robbie, NASCAR’s money man, got his start in Baja and he’s still into the desert in the PROTRUCK class; a vehicle well described by Alan Pflueger as “a controlled explosion . . . like holding a piece of dynamite and trying to keep the explosion in your hand.” Gordon blew a tire and stayed near first place for thirty miles on three good wheels. Ricky Johnson, the SuperCross champion, was there riding a PROTRUCK and supporting Mouse McCoy. The trucks are, in fact, unbelievable.  When they hit the dirt, it’s “a 20,000 horsepower free-for-all.” The 4-wheel passing etiquette at Baja is something we all ought to emulate.  When the guy in front won’t let you by, slam into his bumper so he’ll know you’re back there.  If that doesn’t do the job, hit him harder.

An old hero of mine, 62 year old J.N. Roberts from the original off-road documentary On Any Sunday, is riding with his son, Jimmy.  J.N was the winner of the first Baja 1000, in 1967.  J.N. would be signing up for Social Security the January after the race.  The short segment of J.N. ripping by riders, making up time after a crash, was beyond inspiring. J.N.’s old “On Any Sunday” riding buddy, Malcom Smith is in Glory, too.  These guys are the first two champions of Baja.

There are a couple of touchy-feely human interest segments that I could do without, which is what a remote control and fast-forward is all about.  I enjoyed this film for the racing and any interruption of that extraordinary activity is wasted time. I’ve been a Malcolm Smith fan for most of my life, but I thought the MS & Son in Baja bit went too long and provided too little information for the time spent.

In his brief moment on screen, enduro great and 12 time Baja champ, Larry Roesler, describes what it’s like to ride at this level.  He still rides Baja, but he doesn’t ride to win it.   Johnny Campbell, Honda’s top rider and the Baja two-wheel hero, is ruthlessly in the hunt and always rides to win.  Andy Grider, on Honda’s B Team, snagged the top spot from Campbell and hung on to it till he handed over the bike to his co-rider, 350 miles from the end of the race.  Grider, on the 11x bike, stole the lead from 1x and hung on to it through the silt beds and over hundreds of miles of ridiculous terrain.  The footage of this one-on-one race is my highlight of the movie.  All that work vanished when the B Team Honda wouldn’t start on the handoff. This two-team competition is at the top of the best motorcycle racing footage I’ve ever seen.

Mike “Mouse” McCoy is the heart of the story, riding all 1000 miles by himself.  What McCoy planned to do was, according to a lot of experienced people, impossible. Almost halfway through the race, McCoy was holding on to third and having fun. Just before the sun went down and near the half-way mark, McCoy wrestled with a flat tire for 40 miles. At the pitstop, he seemed nearly delirious. Two hundred miles later, he complains that he can’t feel his hands.  At 720 miles, he still has third place in sight and soon rips into second, in the dark.  His race ends soon after, in a crash, but his ride doesn’t.  He eventually is the sixth bike to finish and his ride to the end is an inspiring moment for any distance race fan.

All of the racers in this film are totally out of the ordinary.  For starters, there is next-to-no prize money involved ($4,000 for the Class One Unlimited Buggies) and only limited sponsorship cash for the winners.  The Sportsman Class entry fee is $1500 and practically every kind of racer imaginable rides this event; everything from ratty old 1960s VW Beetles to totally freaked out high-buck SUVs in the four-wheel classes and bikers from the hobby class to the top off-road pros in the country.  There are teams with trainers, communications experts, mechanics and garage-in-a-semi rigs and folks who roped their bike into the back of an old pickup and had a friend drive the pickup to each checkpoint with a cooler full of Gatorade and granola bars.  The big money riders have choppers for chase vehicles. Still, this is as close to an Everyman’s Race as you’re likely to experience. The film is peppered with low-budget racers and their perspective on the race.

For off-roaders, the Baja 1,000 is a rite of passage. Some folks argue, “If you haven’t done it, you haven’t done anything.” I haven’t done it and, judging from this movie, I never will.  Probably the closest I’ll get will be when I’m on the edge of my seat during the Dust to Glory helmet-cam sequences.  Every time the perspective shifted from overhead to helmet cam, I get tense and have compulsive desire to hang on to something solid through these intense segments.  From that perspective it’s hard to believe that crashing at these speeds would not be fatal. The show adds to that with night racing footage, which I found to be seriously nuts.  Dust to Glory is as close as I’m likely to get to desert racing at this level, but it’s close enough that I’ve learned more than a little about what it takes to be there.

This entry was posted in movie review. Bookmark the permalink.